Warning: This document is for the development version of Bareos Documentation. The main version is bareos-22.

The Bareos project provides packages that have been released on http://download.bareos.org/bareos/release/.

Additionally, the following table gives an overview on the available package versions and the operating systems, respectively:

The Bareos project provides packages for the current releases of all major Linux distributions. In order to support even more platforms Bareos Version >= 21.0.0 provides the so called Universal Linux Client (ULC).

The Universal Linux Client is a Bareos File Daemon, built in a way to have minimal dependencies to other libraries.

The Universal Linux Client depends on the OpenSSL library of the host in order to utilize security updates for this library.

It incorporates all functionality for normal backup and restore operations, however it has only limited plugin support.

Currently it is provided as a Debian package. However, it is planed to provide it also in other formats.

The ULC have extra repositories, their names starting with ULC_ (e.g. ULC_deb_OpenSSL_1.1) at https://download.bareos.org/bareos/release/. There will be different repositories depending on packaging standard and remaining dependencies. These repositories contain the bareos-universal-client package and sometimes their corresponding debug package. You can either add the repository to your system or only download and install the package file.

One of ULC’s goals is to support new platforms for which native packages are not yet available. As soon as native packages are available, their repository can be added and on an update the ULC package will be seamlessly replaced by the normal Bareos File Daemon package. No change to the Bareos configuration is required.

While ULC packages are designed to run on as many Linux platforms as possible, they should only be used if this platform is not directly supported by the Bareos project. When available, native packages should be preferred.

The Univention Corporate Server (UCS) is an enterprise Linux distribution based on Debian.

For UCS releases < 5.0, Bareos offers extended integration into UCS and provides its software also via the App Center. With version 5.0 of the UCS App Center the method of integration changed requiring commercially not reasonable efforts for deep integration.

Bareos continues to support UCS with the same functionality as the other Linux distributions.

During the build process, Bareos Debian 10 packages are automatically tested on an UCS 5.0 system. Only packages that passes this acceptance test, will get released by the Bareos project.

The Univention Corporate Server is an enterprise Linux distribution based on Debian. It consists of an integrated management system for the centralised administration of servers, computer workplaces, users and their rights as well as a wide range of server applications. It also includes an Unvention App Center for the easy installation and management of extensions and appliances.

Bareos <= 21 is part of the App Center and therefore an Univention environment (UCS < 5) can easily be extended to provide backup functionality for the Univention servers as well as for the connected client systems. Using the Univention Management Console (UMC), you can also create backup jobs for client computers (Windows or Linux systems), without the need of editing configuration files.

The Bareos Univention App is shipped with a default configuration for the director daemon and the storage daemon.

You need to review some Univention configuration registry (UCR) variables. Most likely, you will want to set the location where the backups are stored. Otherwise, you may quickly run out of disk space on your backup server!

You will find further information under Backup Storage.

don’t backup the server itself

backup the server itself 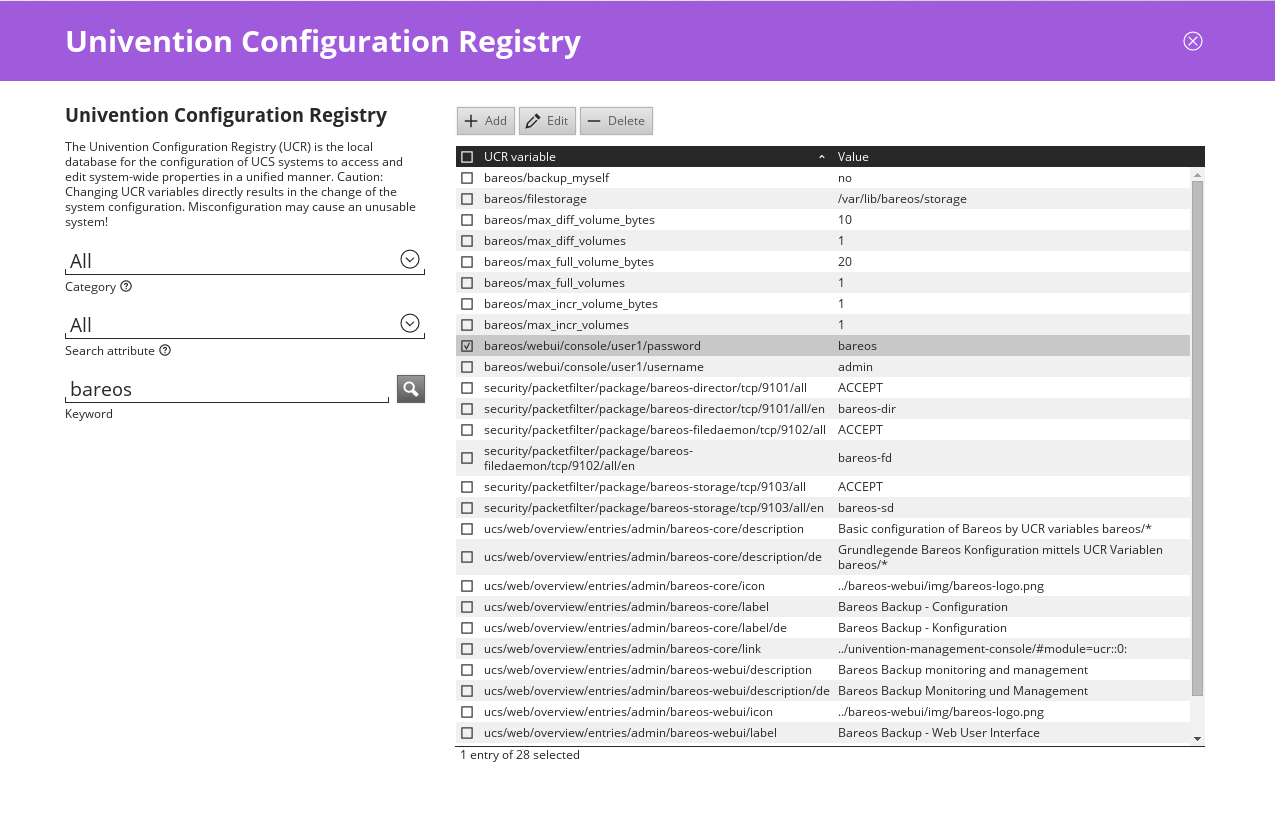 Enable backup of the server itself

After installation of the Bareos app, Bareos is ready for operation. A default configuration is created automatically.

If you want to enable automatic backups of the server, you need to set the Univention configuration registry (UCR) variable bareos/backup_myself to yes and reload the director daemon.

For general tasks the bareos-webui can be used. Additional, there is the bconsole command line tool:

As a result of the default configuration located at the bareos-dir, the backup schedule will look as follows:

There is also a special backup task, which is the Bareos backups itself for a possible disaster recovery. This backup has got its own backup cycle which starts after the main backups. The backup consists of a database backup for the metadata of the Bareos backup server and a backup of the Bareos configuration files under /etc/bareos/.

Data from the backup jobs is written to volumes, which are organized in pools (see chapter Pool Resource).

If you change the UCR variables, the configuration files will be rewritten automatically. After each change you will need to reload the director daemon.

This only affects new volumes. Existing volumes will not change there size.

Using the default configuration, Bareos will store backups on your local disk. You may want to store the data to another location to avoid using up all of your disk space.

The location for backups is /var/lib/bareos/storage in the default configuration.

For example, to use a NAS device for storing backups, you can mount your NAS volume via NFS on /var/lib/bareos/storage. Alternatively, you can mount the NAS volume to another directory of your own choice, and change the UCR variable bareos/filestorage to the corresponding path. The directory needs to be writable by user bareos.

Example for changing the storage path

You need to restart the Bareos storage daemon after having changed the storage path:

Alternatively you can also set those UCR variables via commandline.

When your login credentials are set, you can login into Bareos Webui by following the entry in your Administration UCS Overview or directly via https://<UCS_SERVER>/bareos-webui/.

Add a client to the backup

If the name of the client is testw1.example.com, corresponding configuration files will be generated:

The settings for each job resource are defined by the template files you see below:

If you disable the Bareos backup for a client, the client will not be removed from the configuration files. Only the backup job will be set inactive.

If you add three client, your client directory will look similar to this:

The client configuration file contains, as you can see below, the client connection and the job information:

Older versions of Bareos handle generating the client configuration similar, but not identical:

If the name of the client is testw1.example.com, corresponding configuration files will be generated/adapted:

The distributions of Debian >= 8 include a version of Bareos. Ubuntu Universe >= 15.04 does also include these packages.

In the further text, these version will be named Bareos (Debian.org) (also for the Ubuntu Universe version, as this is based on the Debian version).

Bareos for MacOS X is available either

However, you have to choose upfront, which client you want to use. Otherwise conflicts do occur.

Both packages contain the Bareos File Daemon and bconsole.

Installing the Bareos Client as PKG

Find the .pkg you just downloaded. Install the .pkg by holding the CTRL key, left-clicking the installer and choosing “open”.

Follow the directions given to you and finish the installation.

Configure the server-side by follow the instructions at Adding a Client.

After configuring the server-side you can either transfer the necessary configuration file using following command or configure the client locally.

Option 1: Copy the director resource from the Bareos Director to the Client

Assuming your client has the DNS entry client2.example.com and has been added to Bareos Director as client2-fd (Dir->Client):

This differs in so far, as on Linux the configuration files are located under /etc/bareos/, while on MacOS they are located at /usr/local/etc/bareos/.

Option 2: Edit the director resource on the Client

Alternatively, you can edit the file /usr/local/etc/bareos/bareos-fd.d/director/bareos-dir.conf.

This can be done by right-clicking the finder icon in your task bar, select “Go to folder …” and paste /usr/local/etc/bareos/bareos-fd.d/director/.

Select the bareos-dir.conf file and open it.

Alternatively you can also call following command on the command console:

The file should look similar to this:

Set this client-side password to the same value as given on the server-side.

The configuration file contains passwords and therefore must not be accessible for any users except admin users.

Restart bareos-fd after changing the configuration

The bareos-fd must be restarted to reread its configuration:

Verify that the Bareos File Daemon is working

In case, the client does not react, following command are useful the check the status:

You can also manually start bareos-fd in debug mode by: